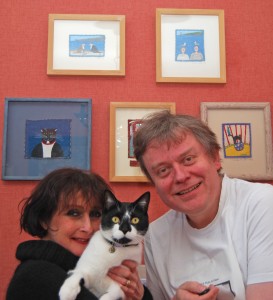 We love cats. We love their intelligent, curious natures; the affection they give only when we’ve earned it, and the way they take care of themselves too. Ever watched a cat stretch as it wakes up and before it moves? They can teach us so much.

Most cats we know like to have people around (even if they don’t show it!) So, as well as making sure we feed and water our furry clients, we stay to play with them or just sit and stroke them.

We live in Surbiton and cover a half-mile radius from our home (please see map). That’s just far enough to make sure each of our feline clients gets the time they need.

And of course we are fully insured as are the wonderful people who help us out during busy times such as August and Christmas, and when we manage to take a break ourselves. It goes without saying they are trained to Monty’s standards and they have his lick of approval. 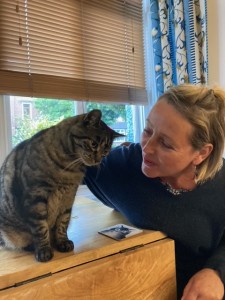 I joined Team Monty in the summer of 2021 after taking voluntary redundancy from British Airways after 30 years.  I’m presently contemplating my next career move but, in the meantime, visiting Mr Monty’s clients is the best job in the world!

I love cats, their different traits, their characters, how they interact with each other and humans.  They are fascinating and beautiful to watch and play with. I’ve a little plaque at home that says ‘All you need in life is Love and a Cat’, how true!

Cats have been part of my life since childhood. My first was a little, all white kitten called Snowy. My sisters had heard of someone who needed to home some kittens and we put pressure on our Mam to let us have one. She loves cats – she just didn’t know it at the time! I can’t remember very much about Snowy as I was quite young but I know it was a sad day when we lost him.

Our next cat was Toby. He was black and white and quite a character. He would jump on your back when you were least expecting it, just to get your attention and his loss after eight years was the worst thing ever. The void left was thankfully soon cat-filled again.

News came of more kittens needing a home so off we went to look and that’s when we came home with Kitty. (we struggled to decide on a name and he got stuck with Kitty along with Buster and many other names too!) We got Kitty’s  Mam, Ziggy (aka Mini moo moo) too. She was part Burmese, long haired, black, beautiful, and elegant. Kitty was a colourful, cuddly mix who was cheeky, entertaining, and very loving. Ziggy was a good mother and cuddled and groomed Kitty all his long life of 18 years.

When I got a place of my own, I knew I wanted a cat. I went to get one from a rescue home near Reigate…and came home with two. Dolly was snuggled into Pip in the cage and I thought they were mother and daughter, but they weren’t related – just from the same household.

Pip was six months and Dolly was three months. They were tabbies with completely different characters. Dolly could be a little bit unpredictable. She’d lure you in, swipe and run off! But as she got older, she mellowed to be more like Pip who just wanted lots of love and food.

When I met my husband, he brought his cat Jeffy along and then there were three. It took some time for them all to tolerate each other. Dolly would play-fight with Jeffy, and Pip wouldn’t bother with either of them.

The girls lived to be 20.  Jeffy now has the place to himself. He likes all the attention and like Pip, he likes his food although he can be rather fussy.

I love fussing and feeding for Mr Monty but don’t tell Jeffy that! 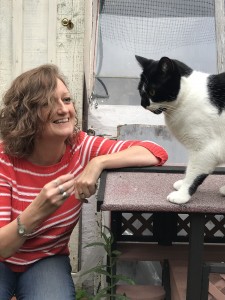 I first met Mr Monty and his staff when I was a fosterer for a cat shelter. I had a steady stream of felines living with me while they waited for their forever homes. In fact, Graham and Elaine  helped to look after several of them!

As you might have guessed, I love cats. I used to have two beauties of my own – Jack, a white, long-haired Persian, and Merlin a British Blue. Sadly Jack passed away, and I had to have Merlin adopted when I had to move to rented accommodation.

I can’t foster cats any more because of where I live, so I jumped at the chance to join Monty’s team of fuss and feeders.

It’s my absolute pleasure to be able to spend a few hours of my day getting my kitty fix by looking after cats, making sure they’re happy while their humans are away, and giving them lots of care and attention.

When I’m not fuss and feeding, I’m a consultant and life coach, helping humans too. 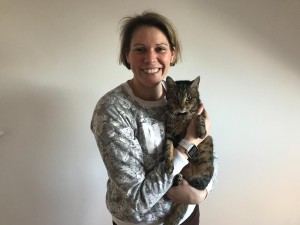 I love the cleverness of cats and their independence. When they take a liking to you it really is a reward!

I’ve always loved animals but I was never allowed pets when I was growing up. So I used to love going to visit friends who had cats.

Our cat, Tiggy, stole my heart as soon as I met her and fortunately, she seemed to like me instantly too. She is so entertaining and mesmerising when she plays. I feel so happy when she’s curled up, purring away: it makes me happy that she’s content.

I love visiting Mr Monty’s clients and making sure they are happy and cared for when their humans are away – they all have such different characters!

When I’m not Fussing and Feeding, I work in the NHS in a specialist nursing role.

I’m passionate about animal rights and I hope to see a future when they are equal and don’t suffer. 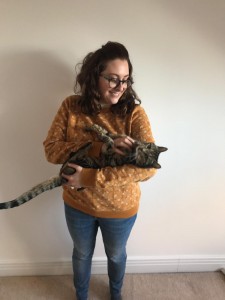 I love cats because they are calm, quiet creatures. They give a lot of love and have so much personality.

I remember getting two kittens when I was very young – Teela and Frosty. Sadly we lost Frost to kidney disease, but Teela went on to live until she was 15. She was a very timid, shy little puss.

When I was much older, my parents got two more cats – Frankie and Sammy, who were joined later by Aslan – a Maine Coon. However, Sammy decided to go and live with someone a couple of doors away, but we still saw him out and about.

Our current cat, Tiger Lily (known as Tiggy) lived above a pub with five other cats, and her humans said she was quite aggressive. They moved to Lanzarote with the other felines, but didn’t want to take Tiggy.

I’d always found her really friendly and was upset to think what might happen to her, so I asked if I could keep her. I moved her into my Nana’s house. Nana was in her 90s and had dementia, but Tiggy was great company for her. When Nana’s condition deteriorated, we moved Tiggy into our flat. She’s almost 18, but she still has lots of energy and doesn’t look her age!

I really enjoy looking after Mr Monty’s clients, and getting to know them and their personalities. I always feel so sad at the end of a booking!

As well as Fussing and Feeding, I’m a registered nurse working in a dementia specialist role.