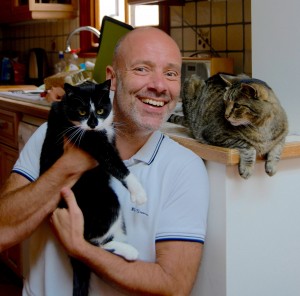 Richard with Maurice and James

Richard will be helping The Staff during busy times and naturally he has my seal of approval.

The Staff – Graham and Elaine – worked with him in one of their previous nine lives and he always used to cheer them up with his wicked sense of humour.

Kind, caring and 100% reliable he was an obvious choice when they were looking for someone to join our team. Of course he had to pass The Monty test first. So I sniffed him out and decided he’s up to my standards.

Richard is cat uncle to James, Maurice, and Phoebe, and Ella, and moves into their home to look after them when his sister and her family are away. He also looks after friends’ cats too. Unfortunately, he has a D.O.G. She’s called Doris and I’ve decided to tolerate this foible because of his more positive traits. 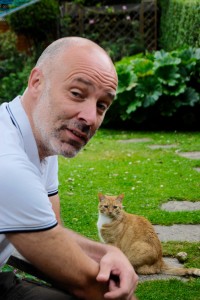 In his spare time Richard treads the boards at the CornerHOUSE theatre in Surbiton. The Staff told me that means he’s a ‘thespian’. Whatever that is I don’t much care because he seems purrrrfectly nice to me.

He has a Level 3 certificate in British Sign Language and is currently studying for an MA in Drama Therapy at Roehampton University, which I think makes him an all-round good egg!